Kuhn proposed, knowledge within any discipline depends on a communally shared commitment to a paradigm.

A paradigm roughly consists of:

THE BLIND MEN AND THE ELEPHANT

IT was six men of Indostan


To learning much inclined,
Who went to see the Elephant
(Though all of them were blind),
That each by observation
Might satisfy his mind.

END_OF_DOCUMENT_TOKEN_TO_BE_REPLACED

“The object of this study is the condition of knowledge in the most highly developed societies.I have decided to use the word postmodernto describe that condition. The word is in current use on the American continent among sociologists and critics; it designates the state of our culture following the transformations which, since the end of the nineteenth century, have altered the game rules for science,literature and the arts. The present study will place these transformations in the context of the crisis of narratives.

END_OF_DOCUMENT_TOKEN_TO_BE_REPLACED

In psychoanalysis, parapraxis – other called a Freudian slip in quotidian lingo – is an error in speech, memory, or physical action that occurs due to the interference of an unconscious subdued wish or internal train of thought.

In The Psychopathology of Everyday Life Freud suggest parapraxis is, “the phenomena can be traced back to incompletely suppressed psychical material, which, although pushed away by consciousness has nevertheless not been robbed of all capacity for expressing itself” (Freud [1901] 1989, p. 344).

In contrast to the widely popular ‘slip of tongue’, Freud described five different forms of parapraxes or slips in his Introductory Lectures on Psychoanalysis.

END_OF_DOCUMENT_TOKEN_TO_BE_REPLACED 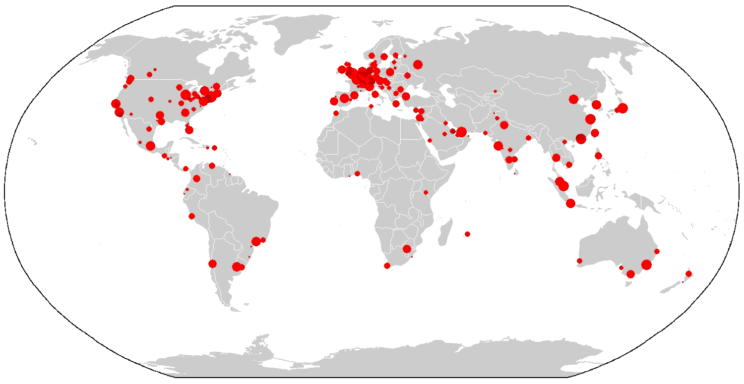 This is a summary of and commentary on the prologue titled “The Metropolitan Explosion” of Peter Hall’s (1966), “The World Cities”.

Although the defining elements of his “World City” remain unchanged, a major shift has been in manufacturing (element # 4b) in urban suburbs. The World Cities are gradually leaving behind the role of being hub for the dissemination of (imported and exported) goods, and specializing in technological, financial, and human “resource management”. That is not to suggest that World Cities are no longer ports (element # 2) (e.g. Istanbul, Shanghai, etc.), but  being a port city is no longer a necessary condition for being a World City. Neither is being “center of political power” (element # 1) (e.g. New York, San Fransisco, etc.). However, the most fundamental defining element of being a “World City” is being a mecca for “riches” (element # 4) and “talent” (element # 3). Hence, a “World City” is a increasingly defined in terms of the concentration of “financial and human capital” instead of “manufacturing and political capital”.